Zanskar is a mysterious phenomenon, an eco-system within itself in the mystical region of Ladakh. It is a state within a state with unique culture, language & raw nature.

We landed in Leh in the January chill of -7 degree Celsius, amid cold and cloudy weather. There is always uncertainty and it is a challenge to land at one of the world’s highest altitude airports perched at 11480 feet. The fact that we landed without any fuss was an auspicious omen for the trek.

A heated warm kitchen was offered to us as a settling place in a rustic hotel at downtown Leh, as opposed to bone chilling rooms without heater. Our minds were in conflict whether to get acclimatized to the chill or enjoy the cozy, comfortable, warm kitchen. It was like choosing to live in a developing country against luxuries of the first world.

After resting on landing day enjoying Gur-Gur, a yak butter tea, we decided to take a stroll in the market place. Buying some gear like gloves, gum boots, crampons that were kept for last minute shopping was exciting as nerves started to build up making us anxious to face the next day. A trip to the 17th century Leh palace built by King Namgyal was a short practice trek for us. We then secured the blessings of monks for the adventure ahead. The panoramic view of the Ladakh range on the east & Stoke range on the west encouraged us further.

The next day, since we were ready to start, we boarded a bus with great enthusiasm. The first site of Zanskar embracing the mighty Indus at their confluence near the village of Nimoo was a nostalgic moment. It brought back memories of white water rafting that we had enjoyed a couple of years back during Markha valley trek in the same free flowing Zanskar. However now, it was showing its frozen face. Zanskar is a big and fast-flowing river, cutting into steep canyon and gorges. The very idea of walking over the frozen river with cold gushing water barely a few feet below us was a terrifying thought. That’s what makes this trek unique, the altitude is less of a challenge but temperatures pose to be the devil dipping below even -25 degree Celsius at nights.

The ‘Chadar’, a blanket of ice formed due to the freezing of the river by harsh winter is the only way in and out for Zanskaris in winter. As the caravan routes of the modern ages are closed due to heavy ice and landslides block the high passes, it has been the only winter trade route for centuries.

Crossing multiple bridges and navigating slippery roads clad with ice & sleet, we finally entered the Zanskar valley to reach Chilling and continued to Tilat Do which was our 1st camp to rest and get a feel of what is to come. After collecting the sacks offloaded from the last mode of transport to reach the heavenly path, we finally stepped on the Zanskar and got to experience WALK ON WATER.

Hot tea with biscuits made for a warm welcome literally and figuratively. We were so mesmerized by the landscape that we did not realize that the tea had turned cold. This taught us our first lesson for the next 6 days which is that things taste better if consumed warm & hence we need to be quick. After that we finally pitched our tents. Trekking tents always give me a philosophical realization of how small a human being is against the mighty canvas of nature. It makes me humble, makes me submit my soul to the almighty. After a hot and filling meal, we held a camp fire, sang songs, shared jokes, a classic bonding activity.

Watching millions of stars in the pitch black sky is a sight which invigorates me every time. When clouds began to make the sky hazy, we decided to call it a night. Getting into the tent and covering our tired and cold bodies in double layer sleeping bags was the first test of fitness at such high altitudes. The next day, local porters serving hot tea in bed made us feel at home and they made sure we rose on time to get set for the day.

Our next stop was Gyalpo. Walking was a challenge; we actually did a cross between gliding and skating. Crampons would have made life little easy, at least psychologically. Dada (lead porter) was leading the group, with a thick hard wooden stick to constantly check the thickness of frozen Chadar under our feet. We were slowly learning to gauge the thickness of the surface. The crackling sound of ice breaking was terrifying in the beginning but turned into a regular experience. It is surprising how fast the human body & brain assesses the surrounding and adjusts to it. Adaptability is the mantra of survival in treks. After a tea & biscuit stop in between, we regained our energy to conquer the curvy, slippery paths and reached the camp for lunch. Bowls of hot soupy noodles had been kept ready for us. The Gyalpo campsite, surrounded by peaks and walls of rock-faces makes a scenic place to spend the night. We were ecstatic when we heard about the possibility of a blue sheep or ‘Bharal’ sighting in the area but weren’t lucky enough for a sighting.

The next day, while walking up the river, altitude gain was starting to affect some of us. To add to that, some pugmarks were also sighted. We were in the kingdom of the Snow Leopard, one of the rarest animals for sighting. We had mixed feelings of fear & fascination thinking about the beast watching us un-noticed from the surrounding peaks. That day was the longest stretch of the trek leading to Tibbs Caves. The tall vertical mountain faces kept sunlight away resulting in the entire river bed of Chadar becoming a solid frozen mass. Cracks in these faces formed caves, a source of shelter for travelers for years. On the way we saw a big waterfall flowing out of a rock having holes mimicking the shape of 2 nostrils, one of the few water bodies that hadn't frozen in these subzero temperatures. A legend about it was shared by Dada about a local king losing his son as a brutal punishment for playing with nature and trying to control its flow. These are punitive messages serving as grim warnings to discourage us from playing with nature which we tend to ignore while ruining our mother earth. These folk stories make you wonder how this information has been preserved and passed from generation to generation without any formal documentation. This beautiful journey ended when we reached the mother of all caves, Tibbs cave. It is a huge crack in the mountain, well-fortified to protect travelers from subzero temperatures at night. Our dream of experiencing a night in the cave was ruined as porters had already reserved their berths in the cave, resting after a grueling, tough day of carrying our entire support system on ice sledges.

Naerak fall was next on our bucket list. Negotiating the deep gorges, we reached a point where Juniper trees were covered with prayer flags giving off a spiritual feel. We carried a twig of this tree as a badge of good luck. We bowed to the almighty for letting us reach our destination. There was a gigantic frozen waterfall refracting a rainbow of colors there. The massive dimensions of this frozen animation were mesmerizing. The Naerak village lies above the river that entails an hour-long trek. Since it was late in the evening & snow fall was anticipated, we decided to not to visit and experience Zanskari rural life in the village. That night we had a feeling of contentment and achievement after completing this rigorous journey. A feeling of complacency sank in and we assumed that the return journey would be cake walk or should I say ice walk simply retracing our own steps.

Ever increasing thunder of flowing river was as if Zanskar was laughing at our thoughts. The flow of water increased during the night since temperatures were rising. Next morning was the complete opposite with whitewashed rock walls and cliffs covered with snow. Suddenly the paths which were familiar, had gotten lost under the cover of snow. We hoped that the dusting of snow over ice would provide a good grip for our return however the situation turned challenging and we realized it soon when Chadar started melting and thus we had to traverse tough ice clad narrow ridges to return.

We started our journey back. Snow cover made it tricky to assess Chadar thickness. We were walking on thin ice with extreme caution, navigating narrow ridges with intimidating and constraining canyon walls on one side and shallow gushing water on the other. Slipping in or falling was not an option due to the risk of freezing and getting swept under ice by fast rushing water with imminent outcome. Places where Chadar had completely washed away, we also had to climb rocks on the banks covered with snow and sleet posing another threat of injury via falling on sharp edges of rocks well chiseled over the centuries by sharp knives of Zanskar flow. We were lucky to continue proceed via intermediate camps as the route ended up getting temporarily suspended by authorities due to landslides between Tibbs & Gyalpo. All the campsites were crowded by trekkers hoping to reach Naerak. We had a huge fan following as everyone was keen to hear about our experiences. As we started sharing the experience, it started slowly sinking in. We started realizing what we had achieved by the blessings & support of Mother Nature.

The last camp was Tilat Sumdo where we were welcomed by Sia bushes. Sia plant is a plant of the rose family used for decoration and its bark is used in payo cha (butter tea) instead of green tea leaves in some areas. Siachen Glaciers is named after this plant. The next morning we walked with heavy hearts to Tila Do to board our bus back to Leh. I always have this mixed feeling at the end of each trek. It is a feeling of achievement, success on one hand and the morose feeling of ending the great experience of being with raw nature and returning to polluted urban life.

However Zanskar was kind enough to challenge us by causing a landslide near Chilling and hence we got a few moments extra with her since our bus couldn’t move past the landslide and we had to walk for a few kilometers to catch the stranded bus. Contented, we bid adieu to Zanskar and ended our WALK ON WATER by taking the skiddy road via urban transport to finally enter urban civilization and celebrate 26th January, the Republic day of India. 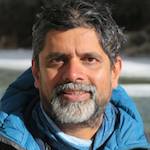